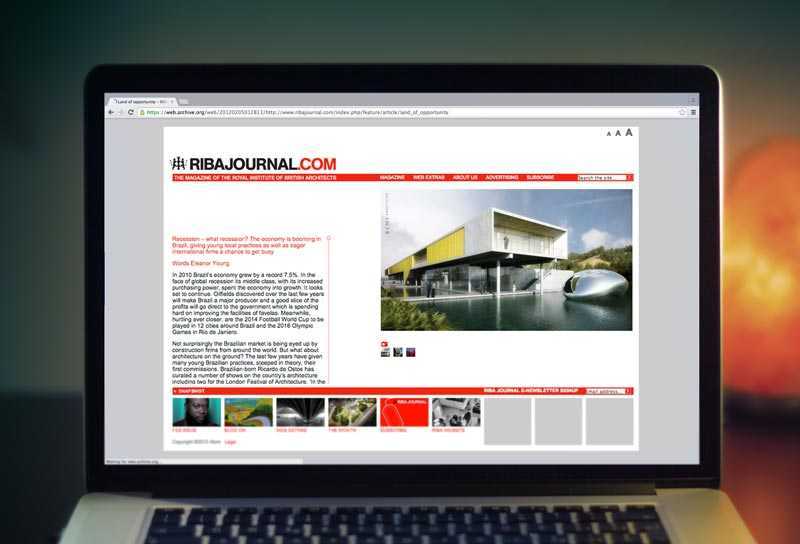 Recession – what recession? The economy is booming in Brazil, giving young local practices as well as eager international firms a chance to get busy

In 2010 Brazil’s economy grew by a record 7.5%. In the face of global recession its middle class, with its increased purchasing power, spent the economy into growth. It looks set to continue. Oilfields discovered over the last few years will make Brazil a major producer and a good slice of the profits will go direct to the government which is spending hard on improving the facilities of favelas. Meanwhile, hurtling ever closer, are the 2014 Football World Cup to be played in 12 cities around Brazil and the 2016 Olympic Games in Rio de Janeiro.

Not surprisingly the Brazilian market is being eyed up by construction firms from around the world. But what about architecture on the ground? The last few years have given many young Brazilian practices, steeped in theory, their first commissions. Brazilian-born Ricardo de Ostos has curated a number of shows on the country’s architecture including two for the London Festival of Architecture. ‘In the last six or seven years the smaller critical practices are having a chance to build, there is a buzz about these practices and how they are making the city.’ This buzz encompasses practices such as Metro, Triptyque and BCMF (see below) as well as BLAC, MMBB, SUBdv and Igor de Vetyemy.

Typically these practices have international experience through either education or jobs. Many started in practice early in their careers rather than compete for a tiny number of staff jobs. But the boom has seen them grow significantly. Metro Architects now has 12 architectural staff, Triptych after 10 years has 25.

De Ostos thinks Brazil’s new economic class will give this generation the opportunity to produce some interesting architecture, whether as direct clients perhaps for their country retreats, or consumers of art or other products.

Martin Carullon of Metro Arquitetos Associados in São Paulo says Brazilian architecture has traditionally been valued mainly in terms of houses and homes – the modernist legacy of Oscar Niemeyer and Paulo Mendes da Rocha notwithstanding. But increasingly over the last decade he has seen ‘architecture’ attached to the areas of public investment, schools and public buildings and now, very slowly to the city itself. ‘In Rio and São Paulo there is a lot of concentration on the future of the slums, for example. The oil money will feed into infrastructure and urbanism and there is already a strong market in social and investment terms. For our generation being involved in urban design is a shift.’

The investment in transport infrastructure from bus transit systems to airports has been given a fillip by the Football World Cup for which visitors will have to be able to get around the country efficiently. But there are other government spending programmes; on housing its Minha Casa, Minha Vida campaign promises a million new homes; and, more widely, cities are taking on their own regeneration projects, such as Nova Luz in São Paulo. Aecom is one international company that has an active presence on this – spearheaded by its UK planning and urban design office previously known as EDAW.

Aecom’s Rio Olympics masterplan may attract the most news but its chief executive of planning, design and development Jason Prior says Nova Luz signals a major shift in the attitudes and instruments of city regeneration similar to that in late 1990s Britain. ‘This is the first project to employ those tactics at scale,’ he explains. Plans for Nova Luz, a 50ha brownfield city centre site, include new transport, housing and workplaces. Brownfield has a different meaning here with abandoned buildings overtaken by sex, crime and drugs and a population in desperate need of low cost housing.  But brownfield regeneration allows development near city centres without further expanding the periphery.

Aecom brings in local firms on such projects but it is clear the most interesting practices are also making their own headway. Thanks to the economy they are no longer confined to bars and houses; they are making their marks on an urban scale wherever possible.

BCMF
At Bruno Campos’ Belo Horizonte practice all 15 architects are working flat out on two major projects, the Mineirão Stadium (RIBAJ September 2011) and a masterplan and three buildings for a science and technology park in Itajubá(above). With 3,000 construction drawings for the stadium alone there is plenty of work to share out.

Much of BCMF’s work has come through collaboration. Studying at the Architectural Association and then working in New York, he knew opportunities were waiting back home along with family and contacts.

Many of BCMF’s projects are associated with big infrastructure contracts and an invitation from one such multidisciplinary team netted him the job of designing the Deodoro Sports Complex for the Pan-American Games which has won medals for sporting architecture and a reputation for sports design that is rare in Brazil.

Architecturally striking, the scheme also brought BCMF into close contact with the sport’s governing bodies – no doubt a contributing factor to its subsequent successes in the field: its concept designs for the Rio 2016 Olympic bid went around the world.

TRYPTIQUE
The four partners of Triptyque studied together in Paris but their inspiration and challenge is the old centre of São Paulo. Their buildings encapsulate a level of originality and surprise with stacked forms, powerful materiality and facades that open and close.

Partner Carolina Bueno says: ‘Because São Paulo is a big city, well-known for insecurity, most of the buildings are completely closed (barricaded). Triptyque is working on the opposite process that consists of inviting the city inside the building, opening the building to the exterior.’

Apartments like the striking Fidalga 727 and office Harmonia 57, with concrete plug planted walls that are periodically misted (left), sit alongside work on airports, hotels and theatres. Founded in 2000, the practice now has 25 architects.

It is particularly enthused about its participation in the works to regularise some of Rio’s favelas. It has one of the 40 projects in the programme to 2020 that range from improving utility infrastructure to residential buildings, from public spaces and landscaping and conservation work. ‘It’s very exciting,’ says Bueno.

METRO ARQUITETOS ASSOCIADOS
Metro grew out of the São Paulo school. Martin Carullon was taught by, employed by and collaborated with Paulo Mendes da Rocha which has given him an entrée to some interesting projects, although he now also attracts them in his own right for his 12-architect practice. He has just finished extending and rebuilding an art gallery, Lemi Galleria, that he originally completed in 2004. It was demolished to move it from one position to the other (yes, they did make some ‘corrections’). ‘I thought it would be funny, this transportation of a building. And it does feel the same.’

Despite working closely with one of Brazil’s greats Carullon feels very much of his own generation. ‘We are connected to the critical tradition but open to national influence with a strong focus on the structure,’ says Carullon. Metro’s Chocolate Museum for Nestle (above) demonstrates this perfectly with a thin steel frame covering red glass. ‘It’s a very light structure, almost only structure.’

Most of the practice’s work is for big companies and cultural institutions including nine cinemas in Brazil’s major cities for Itau and Cais das Artes in the city of Vitória, north of Rio. They have a three houses on site but prefer to be out in the city. ‘We have always looked for public spaces,’ says Carullon.